After saying how much I needed a one-handed camera, I got one. Meet an odd hybrid from 1963: the Fujicarex II.

This is a strange hybrid of SLR and rangefinder that weighs as much as the combined pair and is reputed to have more mirror-slap than a Pentax 67. Think of it as a Single Lens Reflex Rangefinder.

Imagine a design team that started with the desire to combine what they thought were the best features of existing cameras. Through the lens focusing – check. Leaf shutter for easy flash sync – check. Light meter visible in the viewfinder – check. And then it all went wrong. Use your right thumb to control exposure and to focus the lens – check. Add mechanical linkages and drives so that the camera is really heavy – check. Put the film rewind out on the end of the camera, a bit like a Leica – check. Fix the lens to the body so that you can only change focal length by swapping the front group – check. Put a split-image focusing aid in the viewfinder so it still works a bit like a rangefinder camera – check. Build a really complicated shutter mechanism that has to close and open a leaf shutter and a swinging mirror at the same time – check. Weighs nearly a kilo – check.

The 1960s were the time of the fixed-lens rangefinder or viewfinder camera, typically with a 45mm f2.8 lens. So this Fuji seems to have been an odd progression path, offering the photographer a camera that looked and worked a lot like their trusted scale-focus friend, but had a fast lens and some of the features of an SLR. With the odd selling point of being able to use it one-handed. If you were right handed. At least it left you one hand free to support its weight. Think of it as a mirror-image Exakta.

So, snarking aside, what’s it like to use? Odd.

The metering is displayed in the viewfinder. You set the film speed on the lens and select the shutter speed. The aperture and speed move together to maintain the exposure value, or you can turn the dial on the back of the camera to alter the aperture alone until the meter needle falls into the correct zone. It has a good ISO range of 10 to 1600.

The aperture in use is visible through a little window on the top of the lens. The distance of focus is visible in feet on one side of the camera and in meters on the other. There is no way of setting the hyperfocal distance – you would need to carry the manual to refer to the depth of field scale. There is a lever on the bottom of the lens that stops-down the aperture so you can judge depth of field.

The meter on this one is dead, but if working it would display in the viewfinder. Besides the over and under markings. there are separate markings for 160 and 32 ISO film, as these settings are not shown on the lens. The manual has instructions on how to meter for ISO 32, 64 and 160.

The focusing screen is unusual, with a horizontal section that acts as a rangefinder wedge.

The flash shoe is cold, as the trigger contacts are in the leaf shutter lens. Even my 1948-ish Mercury managed to have a hot shoe (and a second cold one).

In use it’s quite slow, as the focusing thumbwheel is harder to use than twisting the lens. You also risk changing the aperture instead of focusing. Basically you are taking this camera away from your eye a lot to check the settings. Fine for posed snapshots but I wouldn’t use this for sports. Not unless I could prefocus. There’s a lot happens when you press the shutter too, so the noise is quite distinctive.

I’m also a bit nervous about using it. There is a lot going on inside the camera and I managed to lock it up by using the self-timer – the clockwork is very stiff and it took some encouragement to run it through and give me the camera back. Speaking of shutters, this doesn’t look like it has a separate leaf shutter and aperture in the lens. Watching it work it looks like the aperture stops down and returns, so there is some clever timing going-on between the lens and the mirror.

Its first outing was a trip to the local woods. The shutter noise is quite loud and the focusing screen is dark. I found myself using the odd central rangefinder section to focus. I also kept moving the exposure dial instead of the focus one, which meant taking the camera away from my eye to tilt it and check the aperture setting. 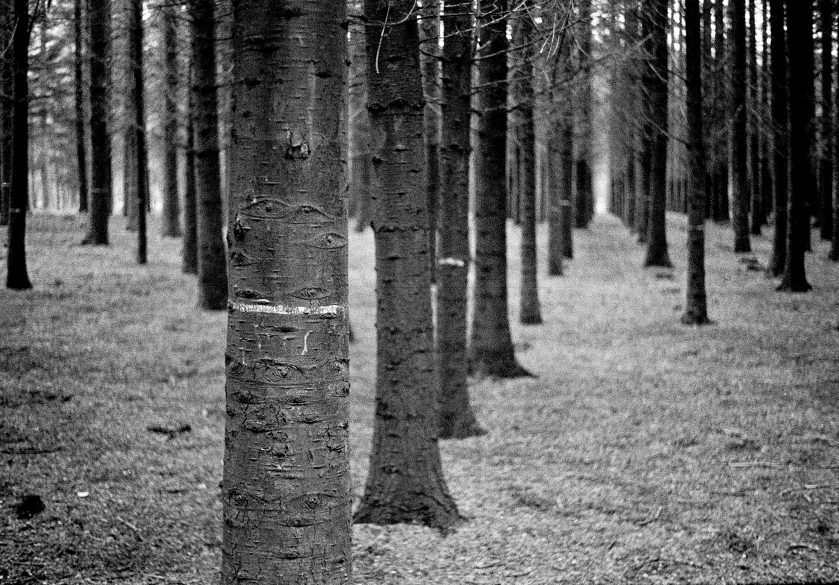 Overall it feels like a complex solution to a problem I’m not sure I had. But the film frames were well exposed and evenly spaced, the lens seems sharp enough and the bokeh is smooth.

Would you want one? Probably only to see how weird it is.

Just before going to press I learned that Fuji used the same focussing thumbwheel on other camera models.

One thought on “The Fujicarex II”