This is one of the site foreman’s cameras built for the Japanese construction industry in the late 80s and early 90s. They made a variety of these, some with a 35mm or 40mm lens, one with a zoom and a twin-lens (switching) version. My one has a 28mm lens.

It’s a big, chunky package but not heavy. It’s not waterproof to the extent you could take it in a pool, but enough to survive rain and being dropped in the pool. More to the point, it is dust, sand and muck proof and will take a bit of a beating.

I have written about it before, but not shown what it can do. This is a look at the output. 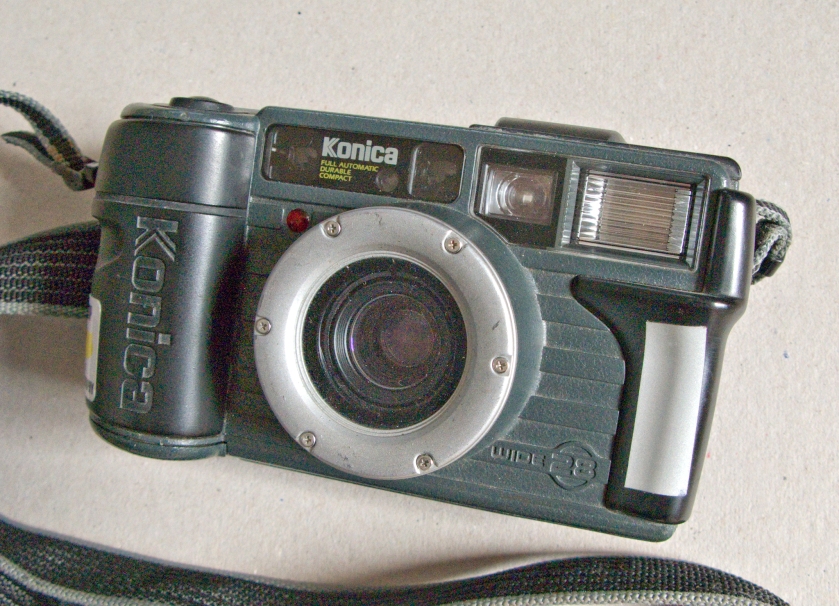 What you can see on the front of the camera is, to the left and around the logo, a pair of autofocus rangefinder windows, then the viewfinder and finally the flash. The viewfinder is unusual that it follows a folded path. This lets the eyepiece site quite high on the camera body, while the viewpoint is lower down and closer to the lens.

The lens is sharp and contrasty and reminiscent of a Lomo LCA in that it shows some vignetting. The colour pictures here were shot on expired film, hence the colour cast.

The mono picture of the Chevy was developed using a semi-stand method, which has evened-out the corners nicely. In use the viewfinder shows a central circle which is the autofocus spot. It’s actually quite fast to use – a half-press on the shutter finds and locks focus, a quick reframe and shoot. The viewfinder also has some parallax marks for closeups, as it has a macro mode.

What I was not expecting from a wide angle lens was smooth bokeh, but this has it. It’s probably difficult to see at this scale, but the books to the right of the dog are smoothly blurred with no repeating patterns.

The controls are simple – you have an on/off button and a mode switch. The mode switch cycles through the options of auto focus with auto flash (the default); flash on; flash off; self timer; flash off with infinity focus; macro with flash on.

The only thing I have found to be careful of is the protective front glass, which can catch the sun and cause flare. This is not the camera for sunny days though: this camera is for British summers.

In case you can’t be bothered to go back to the earlier review, the technical specs are:

OK, so it’s not a Pentax Espio 928, but I would rather take the Konica on a windy beach.